Re: Comfort Woman statue which Korean anti-Japan group plans to unveil
at Korean Society of Victoria in Oakleigh on 14 November, 2019

My name is Sumiyo Egawa, Secretary-General of Australia-Japan Community Network. We are a group of Japanese and Australian parents who gathered to protect our children from bullying and harassment caused by activities conducted by politically motivated people and organisations. We have been opposing the erection of so-called comfort woman statues in any public or private places visible from roads and streets because such statues have always been politically utilized and causing unnecessary disharmony in local communities that often leads to hostile acts against children of Japanese heritage.
Completely apart from interpretation of historical facts we have a numerous number of reasons to believe this statue has been promoted as a political tool causing unnecessary animosity and division to local communities.  For this reason, Strathfield Council unanimously declined the Korean and Chinese proposal in 2015 as more than 70% of residents voted No to the statue. This kind of statues have been erected all over the world, and demonstrations taking place beside the statues are clearly political, racial and often violent.  We consider this is a huge intimidation to the Japanese nationals.  Please see the photos below for your references.  What further concerns us is the fact that those specific Korean people promoting the statue are trying to break the governmental mutual agreement proposed by both Japanese and the South Korean governments. This agreement is implemented with the aim to provide assistance to the families of deceased comfort women and surviving comfort women, and Australian government officially announced that they also support this agreement as well. We hardly understand why we can not let the two governments settle and build a better relationship for the future.  This statue is a clear symbol with the intention of disregarding the governmental agreement. 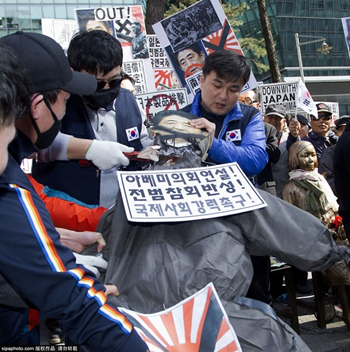 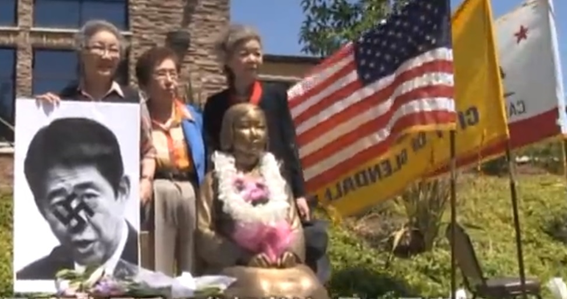 One of the ceremonies held in the U.S. to promote the “comfort women” statue.

Australia is a multicultural country believing that all people should be able to live in harmony and enjoy freedom from discrimination. To erect a statue that demonizes one nation in the name of Women’s Human Rights is in direct conflict with the nature of said multiculturalism. The statue erected in Glendale, California is proof that these statues generate hate rather than love. I attached our presentation material, "Harmony must come first" and Letter from Mother in LA for understanding what happened surrounding the statues. No matter who claims that this statue represents the human rights and dignity of women, you can understand how this statue is political and symbolizes hatred. To erect the statue potentially creates a hostile environment for local Japanese residents and their children. It also assists these politically motivated anti- Japan forces to drive a wedge between Japan and Australia which is their major operational intention outlined in the book “Silent invasion” written by an Australian academic, Dr.Clive Hamilton and plotted by the authoritarian, communist regimes who are supporting and financing this agenda.

The "Comfort Women Statue" issue began in Sydney in February 2014 when the Chinese and Korean alliance called "The United Austral Korean-Chinese Alliance against Japanese War Crimes" (KACA) held a meeting to announce the ten goals of their anti-Japan lobbying which included their political activities such as "to lobby the Australian Prime Minister to put less importance on foreign diplomatic relationships with Japan" and "to erect the Comfort Women statues in all regions of Australia". Since that time, we have observed various figures of the anti-Japan alliance (and of the associated individuals/ organisations) that took part in endorsing the statue to be erected in Sydney.

1. The first movement for erecting the Comfort Women statue
(The proposal for the erection was rejected by Strathfield City Council on August 11, 2015)
The organisation that submitted a proposal to erect a Comfort Women statue in the square in front of Strathfield Station is an anti-Japanese organization called KACA.
In September 2014 issue of the "Journal of the Korean Society of Sydney", KACA posted a totally political declaration called “The Eight Objectives”.  In it KACA stated that it would work for the interest of Korea and China. (Please refer attached “The Eight Objectives/Points”) When Japanese Prime Minister Abe visited Australia in July 2014, KACA disseminated an open letter to parliamentarians, state councils and the media, criticizing the Japanese government and demonstrated in front of the National Assembly in Canberra. 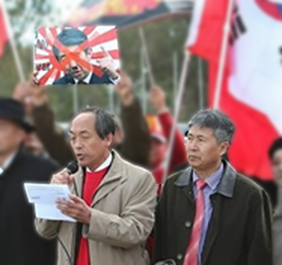 (Mr.Ok speaking at that time with Mr. Song, leader of KACA standing by his side, taking part in an anti-Japan demonstration in Canberra, July 2014)

Mr. Sang Ok, the Deputy Mayor of Strathfield at the time, was the chairman of KACA. In 2015 he was replaced by Mr. Luke Song, the former chairman of KSSA (Korean Society of Sydney, Australia). Mr. Luke Song wrote several extreme hate comments on KSSA’s website regarding the Abe cabinet and the Japanese Australian residents while he was the chairman of KSSA. Mr. Song insists that the proposed statue was only to enhance woman’s human rights.  Nonetheless, he used language such as “destroy Shinzo Abe and the Japanese who are dreaming of reviving militarism” and “we are fighting against our enemy to end our sad history”. These strong aggressive words and statements are very common from all the anti-Japan Chinese Korean alliance groups around the world . In September 2014 they released their mission statement in a Korean newspaper in Sydney in which they stated the following:
"We will urge the US government not to be deceived by Japan, acknowledge the dark evil intention of Prime Minister Abe, stop remilitarization of Japan and change their foreign policies that put Japan first before Korea and China."
"Three Sisters", the Comfort Woman statue, which was proposed to be erected in Strathfield was designed by a Chinese artist and allegedly the cost of the production was to be born by the CCP, the Chinese Communist Party.

2. The second movement for erecting Comfort Women statues
The trigger for beginning stage two of this campaign of erecting comfort women statues was the agreement made between the Japanese and Korean governments to finally settle the Comfort Women issue on December 28, 2015. “Chong Dae Hyup”, an anti-Japan political group which is closely related to North Korea, opposed this governmental agreement and began their monthly Wednesday demonstrations all over the world. In response to this, FCWS (Friends of Comfort Women in Sydney) and Project Group Sysochu (Peace Statue Establishing Committee in Sydney), were formed in Sydney and they started monthly Wednesday demonstrations in Sydney and Brisbane. Many of the members of the two groups, however, are the same people and they really are just one organization. This includes members belonging to existing organizations such as KACA, The Korean Cultural Center Inc. and KSSA.  Although Mr. Luke Song, Chairperson of KACA appeared to disappear from the scene following his failure to erect the statue in Strathfield, he consequently visited the Uniting Church in Ashfield on 22 February 2016 with FCWS members to discuss with Rev. Crews about relocating the statue to the Uniting Church ground. 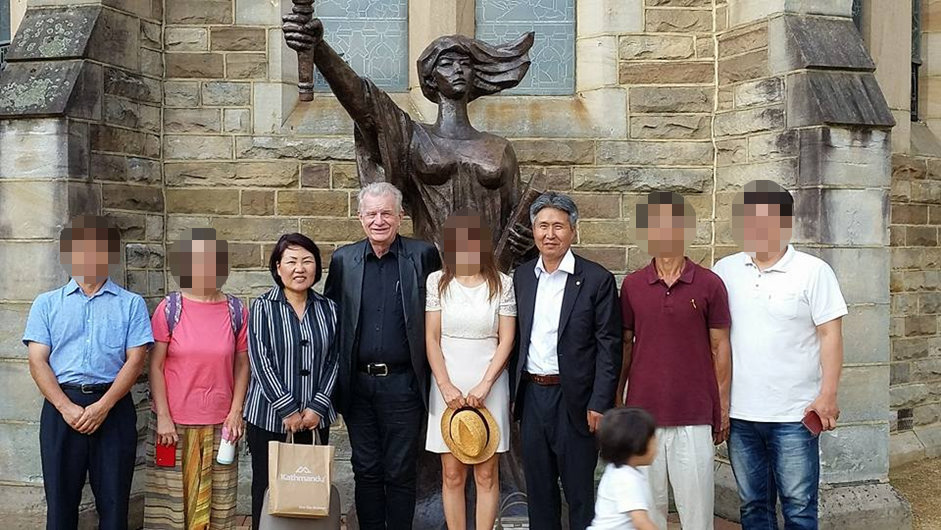 The purpose of this anti-Japan activist group is to tear down the Japan-ROK agreement, and demand the Japanese government pay even greater reparations to ex-Comfort Women. The preparatory work to erect the statue was sponsored and carried out under the direction of Chong Dae Hyup. Please see below further information regarding the people involved, who attended the unveiling ceremony on 6 August, 2016 .

About Chong Dae Hyup and its leader, Ms. Yun Mi-Hyang
The main player who brought the statue to the Uniting Church in Ashfield was Chong Dae Hyup in 2016.  At the initiative of Chong Dae Hyup, the campaign activities were carried out by young Koreans holding working holiday visas and student visas. The below photo is taken in unveiling ceremony held in 2016. Front left is Rev.Crews and back left is Ms.Yun Mi-Hyang.   Former Chong Dae Hyup changed to the Name of the group to "The Korean Council for the Women Drafted for Military Sexual Slavery by Japan War." 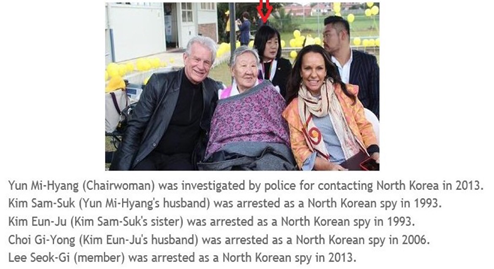 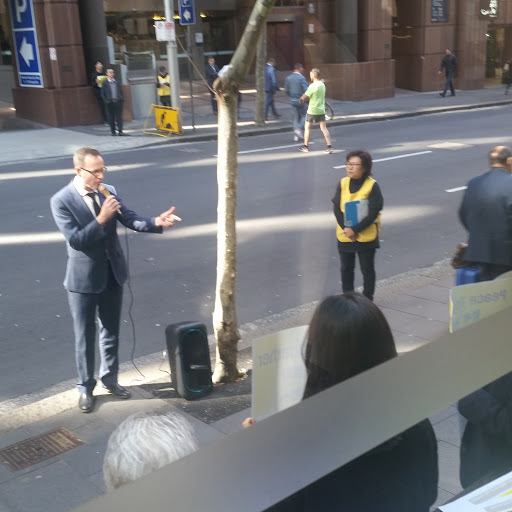 Although we sent a letter of protest to Mr.David Shoebridge and the Headquarters of the Greens, they replied nothing to us. As FCWS and its main members may be regarded as the agents of North Korea or Chinese Communist Party, they are subject to surveillance of Australian security agencies. Australian government and ASIO realise that the erections of the Comfort Women statues are a part of activities of the anti-Japanese Korean group is said to be just a glove and the hand inside that moves this glove is the CCP, in this worldwide anti-Japan lobbying. Since these Korean anti-Japan activities are being utilised as a part of the Chinese Communist Party’s information operation attempting to cut the ties of the alliance between Japan, The U.S. and Australia.

About who intends to erect the Comfort Women statue in Melbourne
I found the invitation notice of the unveiling ceremony in Melbourne in the Facebook site of FCWS. This time the promoter is  "Melbourne Comfort Women Memorial Task Force" led by Chunje Cho, President MCWM Task Force. I believe this group works with FCWS.
The ceremony will be held at Korean Society of Victoria, 21-29 Railway Ave, Oakleigh VIC 3166. 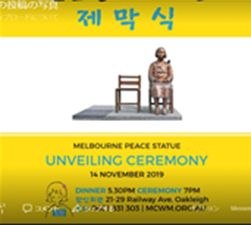 The issue for us is where they will bring the statue after the unveiling ceremony.
We would like you not to permit this statue will be put on the ground of public place or private place visible from roads and streets.

In conclusion, we can only see one reason for this statue and that is to create ill feeling at the least, and hatred, at the worst, towards Japan and its people and the people of Japanese heritage residing in Australia. This goes against all that being a multicultural country stands for.
If this statue is built in a publicly visible place, as exemplary citizen of the world for more than 70 years since the end of war, we will strongly challenge against the erection of the statue to protect  peaceful Melbourne. 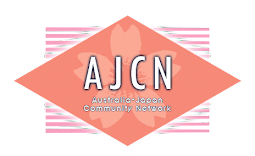